A Britain’s leading modern-art gallery, Tate Modern, was established in 2000. The collections in Tate Modern consist of works of international modern and contemporary art dated back from 1900 until today and it continues to become one of London’s most popular attractions. Londoners says visit to London isn’t complete without a trip to Tate Modern.
Tate Modern is a vast institution occupying the former Bankside Power Station, it is set to grow further with a major new Herzog & de Meuron-designed extension opened in 2016, New Tate Modern. 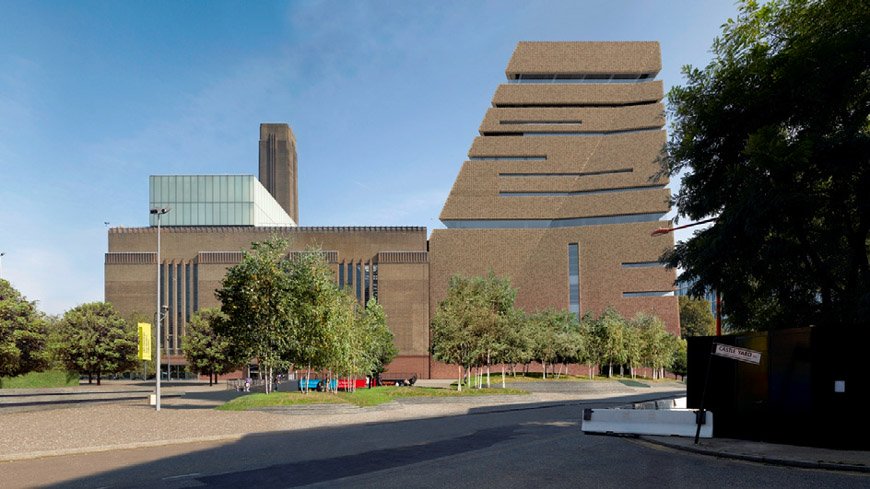 What should people see at Tate Modern?

Tate Modern itself is like a city within a city. Masses of people from every destination, class, nationality and race come here and go. This Gallery is becoming a well-known public space for London and it displays art from across the world, regardless of geography, which allow new connections to be made.
Visitors heading to Tate Modern are treated to a real plethora of modern art. It has eleven floors, numbered 0 to 10. Levels 0, 2, 3 and 4 contain gallery space. Level 0 consists of the Tanks, spaces converted from the power station’s original fuel oil tanks, while all other levels are housed in the tower extension building constructed above them. The Switch House shows art from 1960 to the present day.

Previously level 0 consists of The Tanks that are used to store oil and when the gallery was a power station. This circular spaces in the foundations of the Switch House have kept their rough, industrial feel to now house new art.
Now the tank generates ideas, creative energy and new possibilities for artists and audiences. You can see performances and interactive art and video installations; these galleries celebrate new art. It is the world’s first museum permanently dedicated to exhibiting live art, performance, installation and film.

Turbine Hall is the space which defines Tate Modern the best. A vast iconic space for large-scale sculptures and site-specific installation art and acting as a stage for cutting-edge contemporary art and as an open forum for people to meet, think, play and debate.
Running parallel to the Turbine Hall is the Boiler House, home to the galleries and on the opposite side of the building, the newly developed Switch House and houses galleries and dramatic architectural features. Since Turbine hall is opened in 2000, over 60 million visitors have experienced the Turbine Hall. It is a place for art for people and a place to encounter with everyone in the heart of London.

Top Floor of the new switch House is with an opening view Terrace and beholds awe-inspiring 360ᵒ view of the London skyline, from high above the River Thames, St Paul’s Cathedral and as far as Canary Wharf and Wembley Stadium.

Late at Friday and Saturday evening are the best time to visit Tate Modern, which is likely to be a quieter time to see the collection displays and the exhibitions, as well as being a great opportunity to have a meal or a drink in the restaurant overlooking the river and St Paul’s Cathedral.

Getting to Tate Modern